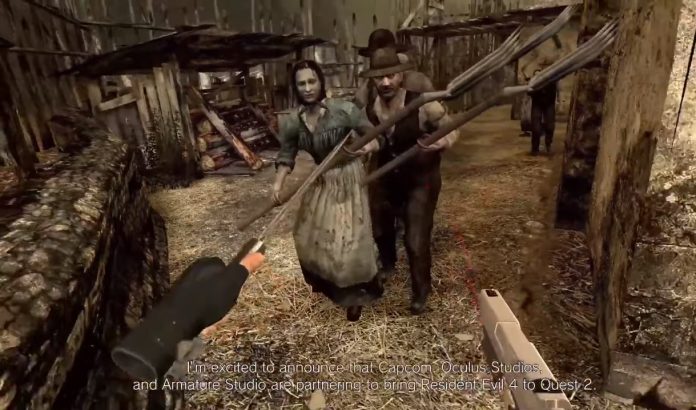 Resident Evil 4 VR has been revealed as the first completely exclusive game for the Oculus Quest 2, 16 years on from its first release. Facebook have confirmed the news to us following the game’s announcement today.

Facebook Reality Labs, Capcom, and Armature are set to launch a remake of Resident Evil 4 – a game that first came out in 2005 – exclusively for the Oculus Quest 2 VR headset. This means that not only will the game not be coming to PSVR or be available on PC VR headsets, it also won’t be coming to the Oculus Quest 1. The Quest 2 launched in October 2020 and since then every single app that’s launched for the platform has also come to its predecessor.

Back when the Quest 2 was first announced Facebook did hint that the headset may eventually get titles that would be exclusive for the Quest 2 only, and wouldn’t come to the Quest 1.

Details on the Resident Evil 4 remake are scarce following this announcement, but we suspect it will be a full remake of the popular classic which we saw back in 2005 on PlayStation. With a VR headset we will finally experience the scare in first-person for the first time.

Fans can expect more details to be revealed during next week’s Oculus Gaming Showcase on April 21.

Share
Facebook
Twitter
Previous articleOculus to allow developers to sell subscriptions to their Quest apps and games
Next articleHalf-Life: Alyx. Still the king of VR games