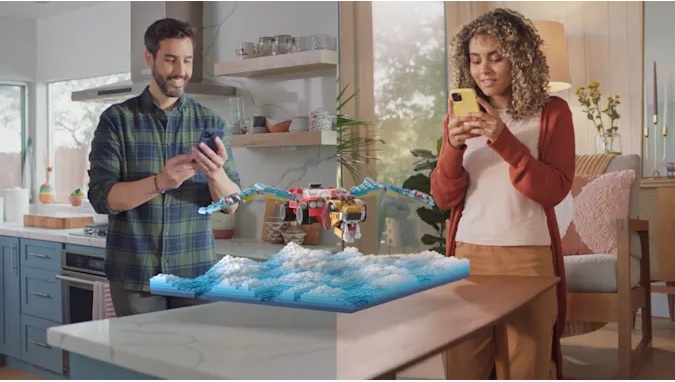 Snap inc. have just unveiled some major upgrades to its in-app Snapchat camera. The company has also announced the release of its 4th generation spectacles – the first to support AR technology.

Snap Inc. held its third annual Snap Partner Summit earlier, where co-founders Evan Spiegel and Bobby Murphy revealed a number of exciting new features coming to the Snapchat app soon. The company have also announced partnerships with YouTube amongst others and also previewed a new, more “inclusive” version of its camera’s technology as they say.

Coming later this year, Snapchat users will have the ability to share clips from YouTube and YouTube Music directly into the Snapchat app. The app currently supports similar integrations with Twitter and SoundCloud, but wants to add videos via YouTube support. Snap has also announced another new integration, this time with Bumble. This will see users able to send selfies with Snapchat Lenses within the dating app too.

Among Snap’s many announcements were several updates in regards to the app’s Scan and Camera tools. These include new shortcuts which are located directly onto the main camera screen, which should make it easier to access these features. As of now, the Snapchat app can recommend some related camera modes, lenses or even soundtracks, depending on what the camera is focused on. Other additional new features include Screenshop, which allows users to scan real-world clothing items in order to receive a recommendation from hundreds of brands. Upcoming features, such as Allrecipes, will take the experience further by allowing users to scan real-world food in order to receive a specific recipe using that item.

There are also some new updates to Lens Studio, which is a free desktop app that allows users with minimal developer experience to create lenses and effects of their own. This will include new interactive lenses called Connected Lenses, which is a new type of Lens that allows you to interact with other users in real-time, regardless of where both users are located. Snap had teamed up with the Lego brand on its first version of such a lens, but will now open the technology via Lens Studio. To help demonstrate the power of Connected Lenses, Snap Inc. has released a LEGO-like brick-building Lens, enabling you to create colourful structures with others in augmented reality (AR).

Snap also shed some new light on what it recently said by increasing its efforts to make its camera “more inclusive”. Essentially, Snap’s lenses don’t always work consistently well for people who have a darker skin tone. This has long been an issue for the app which has been accused of “whitewashing” some users images.

According to Snap, this is due to the camera technology which has long been optimized for lighter skin. The company is now looking deeper into how they can overhaul just how its camera functions, so that it functions the same for people with all types of skin tones. The company also said that it will be making a more “inclusive” version of its camera available to others, via the Camera Kit platform.

Arguably the most exciting announcement from the event however, is the latest Snap Spectacles. These are designed specifically for Snap creators. They are lightweight glasses which are capable of generating AR visuals in real-time. Using the companies proprietary Snap Spatial Engine, these AR-enabled smart glasses will feature dual 3D waveguide displays, a 26.3-degree field of view (FoV), two RGB cameras, four built-in microphones, and two stereo speakers.

These Snap Spectacles will be controlled via a dedicated touchpad that is mounted directly onto the glasses themselves. This allows users to launch different Lenses from the carousel, as well being able to activate the Scan tool. Users are also able to use Voice Scan to search for – and launch – Lenses straight from the headset too. Everything familiar about the app is present on these next-gen glasses, including 6DoF movement, as well as complete hand, body, and surface tracking.

They will be powered by Qualcomm’s Snapdragon XR1 processor and weigh in at just 134 grams. The will have dual waveguide displays with a diagonal field of view (FOV) of just 26.3 degrees. This is a much narrower FOV than other AR headsets such as the HoloLens 2 (52° diagonal) or Magic Leap One (50° diagonal). That aside, they also come with a comfortable 2000 nits of brightness, so these Spectacles are 4 times brighter than the HoloLens 2 and 10 time higher than the Magic Leap, making them suitable for use outdoors. It will also have end-to-end latency of less than 15 milliseconds – meaning virtual objects will appear solid in place.

The only draw back it battery life. Each pair of Snap Spectacles will offer just 30 minutes of action per charge, though this is still actually not too bad for a dedicated AR device with such a slim design. These glasses were built specifically with creators in mind, and they can be tethered wirelessly to Lens Studio, allowing for more seamless use.

Before you think about splashing out on a pair – there’s a catch. Unfortunately, these latest Snapchat Spectacles will not be available for consumer purchasing. Instead, the company is working directly alongside the a select few Snap creators in order to further test the technology. Amongst those selected include Leighton McDonald, who is VR/AR Creator for BlackSoul Gallery and Matthew Hallberg, the AR Developer at SketchFlow.