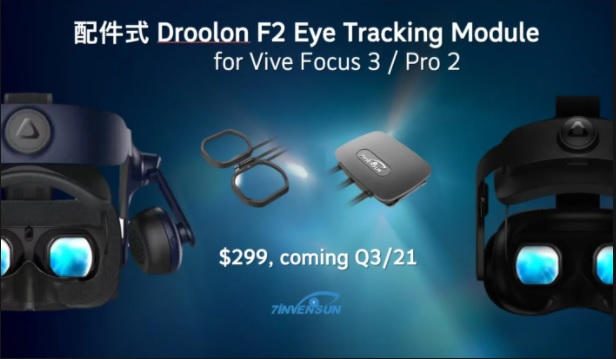 When the HTC Vive Pro 2 and Vive Focus 3 launch later this year, neither will feature integrated eye-tracking, but BOTH will apparently soon support it via an add-on device in Q3.

Announced on Twitter by Vive China President Alvin Wang Graylin today, both headsets will be compatible with the new Droolon F2 Eye-Tracking module which is due to ship later this year.

It remains to be seen whether or not the accessory will actually make it outside of Asia. The original Droolon F1 never really came despite promises of a world-wide release. It also comes as a surprise seeing as HTC themselves made no mention of it during our press briefings. If they truly had solid access to such a feature, surely they would have made more noise.

That said, we did find it strange that the Vive Pro 2 doesn’t launch with native eye-tracking, especially given that its predecessor, the Vive Pro Eye, did. Perhaps the fact there isn’t much in the way of consumer software available to utilise the feature played a part it in omission.

Whilst we normally wouldnt hold our breath for a release anytime soon on western shores, the announcement on Twitter does come priced in USD. It will come at a premium price – twice that of the original F1.

We revealed a couple of days ago that the upcoming PSVR for PlayStation 5 will have its own form of gaze tracking complete with foveated rendering.

HTC has been growing its list of accessories for the Vive platform in recent months, perhaps this is the one to top the list.