HomeReviewsOculus Quest 2 vs PSVR. Which one to buy
Reviews

Oculus Quest 2 vs PSVR. Which one to buy 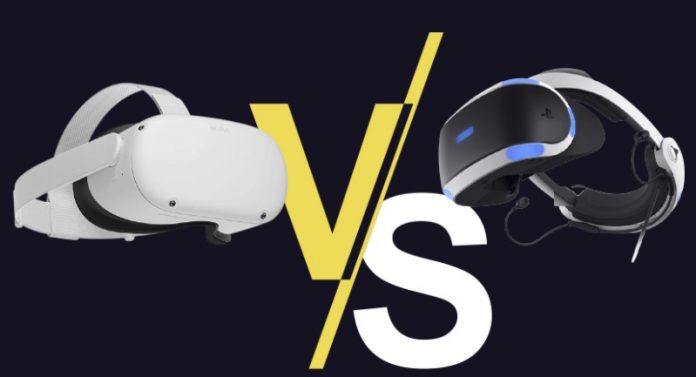 If your new to VR, you’ll almost certainly have been looking at both the best selling VR headsets on the market – the Oculus Quest 2 and the PSVR.

If you don’t have already own a PlayStation 5 the choice is simple – get the Oculus Quest 2. However, if you do have your hands on the latest console it can be difficult to figure out which one would be best for you to enter the world of VR gaming with.

We’ll breakdown both headsets to help you see how they are different and why you might pick one over the other.

The Quest 2 has become one of the best selling headsets on the market since it was released back in October. It’s Facebook’s most recent attempt at developing a mainstream VR headset, having also released a previous Quest model, as well as the Rift.

The major benefit of the Quest 2 is that for as little as $299/£299 you get a fully wireless, standalone headset that works straight out-of-the-box. Unlike the PSVR, it doesn’t require an expensive console to connect with. However, a somewhat controversial move from some consumers perspective, is that you will need to log in to a Facebook account in order to use the headset. There is no escaping it.

Facebooks decision to do this has put off some potential buyers, wary of exactly how much control Facebook will have over yet more of our personal data. Apple do the same with any of their equipment too though – if you’ve ever used an Apple product, you’ll know you need to register an Apple ID. If this doesn’t both you though, then the Quest 2 has some huge benefits over its rivals. Being a wireless, standalone, portable device allows you to take it anywhere and use it anywhere. It has its own battery built in so doesn’t need a mains connection.

So while the Quest will give us a wireless experience, the fact it runs via a battery means that our gameplay time is limited (unless we purchase a power pack attachment). You’ll also need to remember to charge it. Charging can take 2.5 hours from flat to full, so bear that in mind too ahead use.

So provided you’re not put off by the required Facebook login, then the Quest 2 is our recommended headset for anyone new to the world of VR. At a $299/£299 purchase price you have everything you need to get a wireless VR experience. There’s even a host of some amazing free Quest games to get you started in VR.

Another major win for the Quest 2 is that you can also use it to experience PC VR. That is, if you have a gaming PC powerful enough. If you do, you can simply plug the Quest 2 into your PC and open up a larger catalogue of experiences and games in VR. Oculus recently announced that with it latest software update, you can connect wirelessly to your PC too (provided your PC supports it). As many of the best VR games are only available on PC and not on the Quest 2 itself, its a great way to expand your library.

You can follow our guide on how to connect the Quest 2 to enjoy games on PC.

The PlayStation VR headset is a great accessory for anyone who owns a PlayStation consoles. It works with both the PS4, and the latest PS5. Without a console however, the headset cannot play anything at all. This means that if you do need to purchase one separately, it will set you back another $499/£449.99.

PSVR also uses a wired (tethered) connection to a processor box that connects to the console itself. It therefore requires a mains power the duration of gameplay. The trade off here is that while you are tethered, you don’t need to worry about the headset losing power, like the Quest.

As its almost 5 years old, some features of the PSVR may seem outdated. Whereas the Quest has its own built in cameras for tracking movement and orientation, the PSVR uses a separate camera which is plugged into the TV. The tracking is much better on the Quest as a result. The controllers are also significantly worse on the PSVR than other headsets.

PlayStation Move controllers or the PS Aim controller, are usually sold separately but may be included with the headset if part of a bundle offer. This means that you’ll need to purchase a PlayStation console (if you don’t already have one), as well as the headset and controllers in order to play in VR.

Sony have also announced recently that they are working on a new PSVR headset, set to be released sometime in 2022. It is likely that the newer model will be a significant upgrade the current model.

There are few reasons why we would recommend that you buy a PSVR headset in 2021 over a Quest 2. If you already own a PS4 or PS5 console, it makes sense if you’re opposed to logging in with a Facebook account. If the PSVR exclusive titles appeal then that could also be a reason to see value there.

But taking into account the overall cost of getting ‘into’ VR, The Quest 2 wins. If you have to purchase the console, controllers and headset for PSVR, the Quest 2 comes out as a bargain purchase.

If you absolutely don’t want to log in with a Facebook account with Oculus, we suggest looking at other headsets. Alternatively hold out until 2022 and see what Sony’s second attempt at VR brings to console.